One Book, One Community

One Book, One Community is a grass-roots reading initiative that strives to create conversation and bridge differences through the shared experience of reading the same book. By creating conversation, we discover that we have more in common with each other than we think!

We are excited to announce the 2021 One Book, One Community title for Tuscarawas County is, Just Smile and Say Hello, by Trang Moreland. Stay tuned for more information on programs, book discussion groups, author events & more. 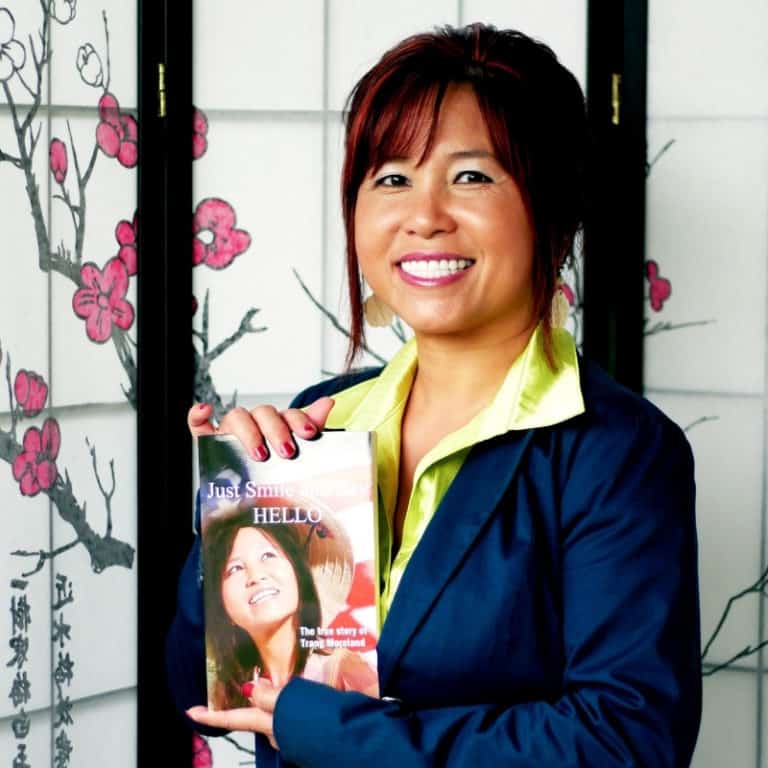 2021 One Book, One Community Programs & Events

One of the memorable parts of Just Smile and Say Hello is when author Trang Moreland organized a school supplies drive to help out the school in Vietnam she went to as a child.  In that spirit, please consider donating to help our students and schools here in Tuscarawas County.  Donation boxes can be found at the following locations:

Inspired by her Vietnamese heritage, author Trang Moreland will show you how to use simple local ingredients to make fresh spring rolls with sweet and spicy sauce.  Limited to 20 people. Call 330-343-6123 to register.

One Book, One Community Writing Contest

In 3,000 words or less tell us about your journey. It can be a work of fiction or nonfiction.  Stories must be received by October 8, 2021.   Winners’ stories will be posted on the OBOC website.  Prizes will be distributed at the October 20, 2021, meeting of the Tusc. Co. Writers Guild.  Winners will also be recognized at the OBOC culminating event at KSU Tuscarawas on Monday, November 1, 2021.

An Evening with Author Trang Moreland

Join us as at this free community event featuring author Trang Moreland.  Moreland will discuss her book, Just Smile and Say Hello, will share her journey to being a published author, and take questions from the audience.  The 2022 One Book, One Community title will also be announced.  A book signing and light refreshments will follow the program.

One Book, One Community Through the Years

2019: How to Break Up With Your Phone, by Catherine Price

You’ll discover how phones and apps are designed to be addictive, and learn how the time we spend on them damages our abilities to focus, think deeply, and form new memories. You’ll then make customized changes to your settings, apps, environment, and mindset that will ultimately enable you to take back control of your life.

2018: How Did that Get in My Lunchbox?, by Chris Butterworth

One of the best parts of a young child’s day is opening a lunchbox and diving in. But how did that delicious food get there? From planting wheat to mixing dough, climbing trees to machine-squeezing fruit, picking cocoa pods to stirring a vat of melted bliss, here is a clear, engaging look at the steps involved in producing some common foods. Health tips and a peek at basic food groups complete the menu.

The book that inspired the Choose Kind movement, a major motion picture, and the critically acclaimed graphic novel White Bird.

August Pullman was born with a facial difference that, up until now, has prevented him from going to a mainstream school. Starting 5th grade at Beecher Prep, he wants nothing more than to be treated as an ordinary kid—but his new classmates can’t get past Auggie’s extraordinary face. WONDER, now a #1 New York Times bestseller and included on the Texas Bluebonnet Award master list, begins from Auggie’s point of view, but soon switches to include his classmates, his sister, her boyfriend, and others. These perspectives converge in a portrait of one community’s struggle with empathy, compassion, and acceptance.

Christmas Jars shares the story of Hope Jensen, an aspiring journalist who uncovers the remarkable secret behind a holiday phenomenon: money-filled glass jars anonymously given to people in need. Hope desperately wants to post the story, but doing so would be a breach of trust to the family who entrusted her with the secret. What she decides to do will change her life forever. A heartwarming story that will restore your faith in humanity and make you want to start your own Christmas Jar tradition.

2015: Thirteen Reasons Why, by Jay Asher

Clay Jensen returns home from school to find a strange package with his name on it lying on his porch. Inside he discovers several cassette tapes recorded by Hannah Baker—his classmate and crush—who committed suicide two weeks earlier. Hannah’s voice tells him that there are thirteen reasons why she decided to end her life. Clay is one of them. If he listens, he’ll find out why.

Clay spends the night crisscrossing his town with Hannah as his guide. He becomes a firsthand witness to Hannah’s pain, and as he follows Hannah’s recorded words throughout his town, what he discovers changes his life forever.

I know where Bernie Jones is; with one late-night phone call, Rick Niece is transported back over forty years to cherished childhood memories of small town DeGraff, Ohio. His daily newspaper route, the sights and wonders of a traveling carnival, the sounds of Christmas caroling-the idyllic memories all circle back to one special relationship. To Rickie, being friends with Bernie Jones was no different than being friends with any other boy in town. Bernie’s physical world was confined to a wheelchair, but that didn’t stop him from being an intrepid daydreamer, adventurer, and hero to Rickie. The unique friendship the boys forged defined an era in both their lives. When he left for college, Rickie promised Bernie they would meet again. Now, decades later, he is making the pilgrimage back to Ohio to fulfill that promise.

2013: The Prize Fighter of Defiance, Ohio, by Terry Ryan

The Prize Winner of Defiance, Ohio introduces Evelyn Ryan, an enterprising woman who kept poverty at bay with wit, poetry, and perfect prose during the “contest era” of the 1950s and 1960s. Evelyn’s winning ways defied the church, her alcoholic husband, and antiquated views of housewives. To her, flouting convention was a small price to pay when it came to raising her six sons and four daughters. Graced with a rare appreciation for life’s inherent hilarity, Evelyn turned every financial challenge into an opportunity for fun and profit. The story of this irrepressible woman, whose clever entries are worthy of Erma Bombeck, Dorothy Parker, and Ogden Nash, is told by her daughter Terry with an infectious joy that shows how a winning spirit will always triumph over poverty.

Guy Montag is a fireman. His job is to destroy the most illegal of commodities, the printed book, along with the houses in which they are hidden. Montag never questions the destruction and ruin his actions produce, returning each day to his bland life and wife, Mildred, who spends all day with her television “family.” But when he meets an eccentric young neighbor, Clarisse, who introduces him to a past where people didn’t live in fear and to a present where one sees the world through the ideas in books instead of the mindless chatter of television, Montag begins to question everything he has ever known.

Ever since he was young, John Robison longed to connect with other people, but by the time he was a teenager, his odd habits—an inclination to blurt out non sequiturs, avoid eye contact, dismantle radios, and dig five-foot holes (and stick his younger brother, Augusten Burroughs, in them)—had earned him the label “social deviant.” It was not until he was forty that he was diagnosed with a form of autism called Asperger’s syndrome. That understanding transformed the way he saw himself—and the world. A born storyteller, Robison has written a moving, darkly funny memoir about a life that has taken him from developing exploding guitars for KISS to building a family of his own. It’s a strange, sly, indelible account—sometimes alien yet always deeply human.

The Good Good Pig celebrates Christopher Hogwood in all his glory, from his inauspicious infancy to hog heaven in rural New Hampshire, where his boundless zest for life and his large, loving heart made him absolute monarch over a (mostly) peaceable kingdom. At first, his domain included only Sy’s cosseted hens and her beautiful border collie, Tess. Then the neighbors began fetching Christopher home from his unauthorized jaunts, the little girls next door started giving him warm, soapy baths, and the villagers brought him delicious leftovers. His intelligence and fame increased along with his girth. He was featured in USA Today and on several National Public Radio environmental programs. On election day, some voters even wrote in Christopher’s name on their ballots.

Odessa, Texas isn’t known to be a place big on dreams, but the Permian Panthers help keep the hopes and dreams of this dusty town going. Socially and racially divided, its fragile economy follows the treacherous boom and bust of the oil business. In bad times, the unemployment rate barrels out of control; in good times, its murder rate skyrockets. But every Friday Night from September to December, when the Permian high school Panthers play football, this West Texas town becomes a place where dreams can come true.

2008: The Man Who Created Paradise, by Gene Logsdon

The Man Who Created Paradise is a message of hope at a time when the very concept of earth stewardship is under attack. The fable, inspired by a true story, tells how Wally Spero looked at one of the bleakest places in America—a raw and barren strip-mined landscape—and saw in it his escape from the drudgery of his factory job. He bought an old bulldozer and used the machine to carve patiently, acre by acre, a beautiful little farm out of a seemingly worthless wasteland.

Learn More About Us